Notre Dame: the Story of the Lady of Paris Skip to main content

Notre Dame: the Story of the Lady of Paris

Notre Dame, is a symbol of Paris and a symbol of France, such as the Eiffel Tower or the Arc de Triomphe. The majestuous and imposant church that represents the millenial History of an entire country, wrote a new page of its own history. On 15th of April, 6h50pm, Paris, the Beautiful Lady of Paris was on fire. During several hours, the fire devorated everything from the pieces of art, the arrow, to the substructure of the church.

However, our lady survive this new episode of her history, its two massive tower are still standing on the île Saint Denis ! It is now the hour of the rebuilding.

Notre Dame was ordered in 1163 by King Louis XII, the building work took almost 100 years and the result would represent the economical, political, intellectual and cultural power of Paris, according to the King’s wish. The history of Notre Dame just begun, 850 years later. It is still standing facing us and times.  The church shows off a french gothic style and is composed by a monumental face, an arrow and a wood substructure. Its access can be made by 4 entrances : the famous Judgement Gate, the Saint-Anne Gate, the Virgin Gate and the Red Gate. The arrow and the wood substructure are today destroyed but the essential part of the building is still here and, after its renovation, will continue its time travel.

The now lost wood substructure of Notre Dame, was one of the oldest substructure of Paris with the Saint-Pierre of Montmartre one. The pattern of the so called “forest” build at the 12th century is a mix of massive wood beams entwined ones on others. The size too is impressive : 100 meters long, 13 meters large in the nef, 40 meters in the corridor and 10 meters high. The substructure of the heart and the nef passed times until us, the transepts and the arrow were rebuilt on the middle of the 19th century. The structure, it is their that Quasimodo was admiring Esmeralda while she was dancing. 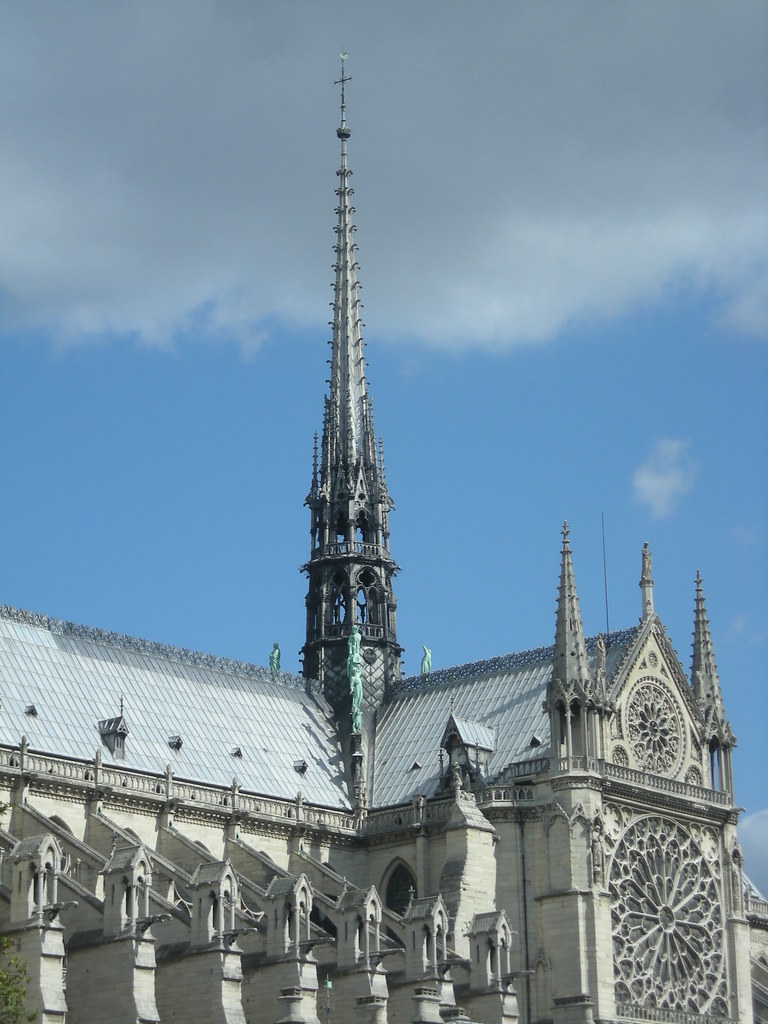 The arrow didn’t survived the fire and still it represents an accumulation of an heavy passed. Built around 1250, it was hosting a maximum of 5 bells until the 17th century. During the french revolution, between 1786 and 1792, it will be unbuilt to be replaced by a second and new arrow made by Viollet-Le-Duc during the big renovation building works. This new arrow will not be a bell tower anymore and will show off a fundamentaly different style than the 13th century one. Surrounded by the 12 apostre among whom Viollet-Le-Duc himself under the lines of Saint Thomas contemplating his artwork.

The arrow and the substructure didn’t resit the flammes, but the rest of the building is still standing and can be proud to concider this fire another small event of its large history. The walls of the church saw historicals and fundamentales moments of French History. When Notre Dame burns, the History of France burns with her. Charles VII, Jeanne D’Arc, Henri IV, the Revoltuion, Bonaparte or the Liberation, the church stood up as a popular symbole under the pen of Victor Hugo and become the patrimony of all humanity when it integrate the UNESCO in 1991.

The Church hosted creative delirium of decades of artists through centuries. Painters, directors or writers, all of them were, one day charmed by the beautiful Lady of Paris. Off course, we think about the famous Bossu of Notre Dame by Victorr Hugo but also the coronation of Napoleon by David.We can also notice that the church was the subject of the first photoshoot of Paris during the funerals of the Duc of Orleans in 1842.

As a resume, Notre Dame is now invicible, crossing the turbulences of History and periods without never falling. The fire of the 15th of April 2019 will forever stay stuck on its history but will not sign the end. The found rising was launched on the night of the 15th and it is now 850 millions of euros that will serve to its reconstruction. The building will be renovated and continue its time cruz.

Get To Know Hilton Astana Hotel: Furnished By BRABBU

10 optical illusions that are actually real!

The best Selection of Interior Designers in California (Part II)

The best Selection of Interior Designers in California

The best Selection of Interior Designers in California